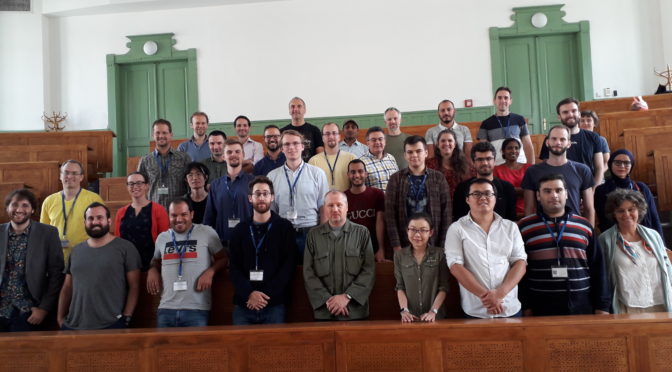 Sponsors: Psi-k Network, Institute of Physics of the Czech Academy of Sciences, University of Liège and Czech Technical University.

The program consisted on 12 theoretical lectures of one hour, 3 short lectures of 30 minutes regarding the postprocessing tools, 9 practical tutorials of 1.5 hours and a session of one hour were each candidate can discuss his personal projects he wants to make with ABINIT. All the lectures and special tutorials not present on the ABINIT website can be found on the school website as pdf or zip files and will be accessible to any future person interested by them.

The lectures were given by a total of 8 different speakers:

A total of 33 participants assisted to the school and they were coming from very diverse place in the world: Algeria, Belgium, Canada, Czech Republic, Germany, Ireland, Republic of Korea, Poland, Ethiopia, France, Luxembourg, India, Saudi Arabia, Spain, Switzerland, Sweden, UK and USA. This shows the global international interest of the school and its success.

A social diner has been organized on the 5th of September at the Pivovarsky brewery with visit of the micro-brewery and the tasting of 8 different beers produced locally.

All the student having given their feedback said to have been very satisfied or satisfied by the school and its organization and that they learned a lot even in topics they were familiar with.