The goal of the workshop was to bring closer together the research communities of theoretical Astrochemistry and theoretical (under Earth conditions) Surface Science. These two fields often address very similar questions, while using the exact same techniques and methodologies (e.g. electronic structure methods such as density functional theory, molecular dynamics or kinetic Monte Carlo simulations). And yet, despite these similarities, a noticeable communication gap exists between the two communities. Our multidisciplinary workshop aimed to bridge this gap and help establish new networking and collaboration ties between these fields.

The workshop covered a broad range of topics ranging from surface reaction networks and kinetic models to the characterization of interstellar ices and questions of energy dissipation and heat transport. In parallel to the underlying scientific questions, special focus was placed on theoretical and methodological aspects, as well as computational and numerical tools that are used in either one or both of the fields of astrochemistry and Earth-related surface science.

Despite considerable uncertainty regarding the COVID19 situation in winter 2021/22, we decided to stick to the original plan to have a fully physical workshop. We had a couple of last-minute cancellations due to COVID19 or other things, but still managed to proceed with a total of 37 participants coming from ten different countries (Europe, Israel and the USA). The program was specifically designed with ample time for in-depth face-to-face discussions, which many of the participants expressed they had missed in online or hybrid meetings during the pandemic.

Description of the program:

We started out in the afternoon with two introductory lectures to theoretical astrochemistry and Earth-related surface science, respectively, given by Prof. Eric Herbst and Prof. Karsten Reuter. These presentations covered some of the main theoretical methods used in the two fields along with specific examples of applications and current challenges. After a short break, we proceeded with 1-minute presentations from all workshop participants. Here we had asked everyone to prepare one slide to introduce themselves, their research interests, methods used, and what they wanted to get out of the workshop. Finally, the day ended with a reception where the participants got the chance to get to know each other more informally.

The morning session was dedicated to the topic “Reaction mechanisms and rate constants”. It began with an invited lecture given by Dr. Albert Rimola, followed by 3 contributed talks. All of these presentations mainly covered reactions happening at ice-coated dust grains in gas clouds in the interstellar space. The afternoon session was about “Reactions of carbon-bearing molecules and polycyclic aromatic hydrocarbons (PAHs)”. It began with an invited lecture given by Prof. Thanja Lamberts, which covered both laboratory and computational astrochemistry, followed by 2 contributed talks on reactions of the benzonitrile molecule and dehydrogenated PAHs, respectively. After a coffee break, we had a 1-hour discussion session, which was chaired by Herma Cuppen and included a panel of the invited speakers Albert Rimola, Thanja Lamberts, Eric Herbst and Liv Hornekær. All workshop participants were encouraged to propose topics encountered during the morning and afternoon session that merited further discussion in this session. The debate was lively with many contributions, both from the panel and from the audience. Finally, the day ended with a poster session where some of the more junior participants presented their research projects.

The morning session was dedicated to the topic “Structure and properties of interstellar ices”. It began with an invited lecture given by Prof. Céline Toubin, followed by 4 contributed talks. These talks covered methods to generate realistic structures of interstellar ices, how to benchmark these structures against astrochemical observations as well as properties of the ices, e.g., binding sites available for adsorption of astrochemically relevant molecules. One talk also addressed how neutrons can be used to explore dynamical amorphous ice systems. In the afternoon session the topic was “Complex materials and structure-dependent kinetics”. It began with an invited lecture given by Prof. Hannes Jónsson, which covered mainly theoretical methods to investigate kinetic systems with diffusion and reactions in astrochemistry and surface science, e.g., adaptive kinetic Monte Carlo. This was followed by 2 contributed talks on heterogeneous catalysis and machine learning, highlighting especially methods for treating complex catalyst materials and complex reaction mechanisms. After a coffee break, we had again a 1-hour discussion session, which was chaired by Mie Andersen and included a panel consisting of Céline Toubin, Hannes Jónsson, Karsten Reuter and Bjørk Hammer. The format was the same as on day 2, and again discussions were very lively. Finally, the day ended with a conference dinner for all workshop participants at Pihlkjær Restaurant in the city center of Aarhus. 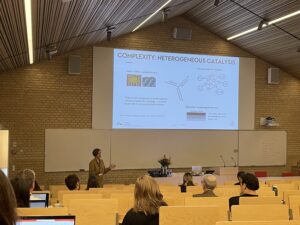 Workshop presentation in the AIAS Auditorium.

The morning session was dedicated to the topic “Energy dissipation and non-thermal processes” and included 3 contributed talks. Two of them was about energy dissipation processes in water ice surfaces and one was about cosmic ray sputtering of interstellar grain ices. After a short coffee break, we had the final talk, which was an invited lecture given by Prof. Liv Hornekær. This talk covered experimental aspects of astrochemistry and surface science with a particular focus on PAHs. The workshop ended with a brief wrap-up from the organizers and lunch.

The feedback from the participants was very positive. Many highlighted that they had really enjoyed the possibility to meet in person for discussions. For several of the participants this was the first physical meeting since the outbreak of the COVID19 pandemic, and they mentioned that they had very much enjoyed also the social parts of the workshop (e.g. the conference dinner), as such elements had been missing in online or hybrid meetings during the pandemic. The participants that were mainly working in one or the other fields of astrochemistry and Earth-related surface science also expressed that they had learned a lot about the other field. Especially the discussion sessions offered ample possibilities for asking clarifying questions to the experts representing one field or the other and to discuss current challenges in both fields.

Overall, we are very happy with the outcome of the workshop. We were especially pleased that we succeeded to attract quite a large number of participants from around the world, despite some initial worries about the uncertainties in the development of the COVID19 pandemic. We believe it was worthwhile to go for a fully physical meeting, since this created an intimate atmosphere where people got to know each other and engaged in discussions that would probably not have taken place in an online or hybrid setting. Hopefully, the insights and new inspiration offered by this workshop will lead to new ideas for research and collaborations within the fields of astrochemistry and Earth-related surface science.