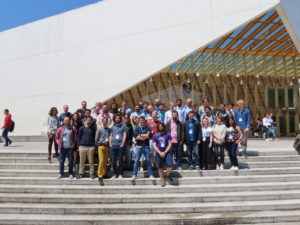 The Young Researchers’ Meeting (YRM) of the European Theoretical Spectroscopy Facility (ETSF) is an annual meeting of the first stage researchers (MSc and PhD students and Postdoctoral researchers) who work on the novel theoretical and computational approaches to study electronic and optical properties of materials.

The conference itself took place at the Carlos Santamaría Center, located roughly 1km away from the Villa Aladi, where participants were accommodated.

The invited talks were held mainly at the beginning of each session, with the duration of 1h each, and with 15min extra dedicated to the questions and discussion. Contribution talks followed, with 25min for a talk and 5min for discussion allocated to each presenter. Such schedule gave the participants a possibility for the common exchange of ideas and possible comments.

Conference has also hosted poster session where some of participants had the opportunity to show their work in graphical representation and to explain it to other researchers in a less formal way.

On the other side, in the Industry session presenters were ex-researchers who transferred from academia to industry. They shared their experience with other participants and provided them with insight into the needs and expectations of the world out of academia concerning physicists and materials scientists.

The conference was attended by 47 participants, exclusively young scientists, of which 9 keynote speakers, 23 contributed talks and 10 posters. A detailed description of the programme can be found the YRM 2019 website, whereas one can find a short review in the following:

The students’ satisfaction survey results show that the programme quality and speakers’ adaptation to the theme and activity was evaluated as ~4.5 (in range 1-5), interest in the current topics got 4.7, whereas the general assessment of the activity of the faculty was evaluated as 4.8. Slightly lower yet solid mark, 4.0, was given to the dissemination of activity of faculty, and ~4.2 to the dissemination of activity of the management. The support of the online platform got mark 4.5, the processing of organization and reception was awarded 4.6, and, finally, the conference management got perfect 5.0 in the general assessment of the activity.

The overall impression during and after the conference was that the participants were satisfied with the organization and mainly the idea of having a conference such as YRM. There was a high responsiveness of the participants in following the lectures. Moreover, many participants showed the interest in exchanging ideas and possibly creating future collaborations.

Additional suggestions given by the participants were the following:

On the other side, the main difficulty that we experienced while organizing this conference was getting in touch with other young researchers, due to the lack of some newer mailing list(s). However, this conference did create a network of YRM participants willing to set new improved methods in order to improve the future organization.

For the full programme of the conference and additional information, please visit conference web page.