The last two decades have witnessed a tremendous growth in the use of Wannier functions (WFs) for first-principles electronic structure calculations. Beyond providing fundamental insights on several aspects of the electronic structure, from chemical bonding to electrical polarisation, topological invariants, Berry curvature and more, WFs have found applications in a plethora of different domains.

The software package WANNIER90 has become a reference for calculating maximally-localised Wannier functions (MLWFs) [1,2] and related properties [2,3,4]. As Wannier functions are independent from the basis sets used to represent the electronic structure in the underlying first-principles calculations, WANNIER90 can be interfaced to virtually any electronic-structure code. Indeed, most of the major electronic-structure packages have already an interface to WANNIER90, including Quantum ESPRESSO, ABINIT, VASP, Siesta, Wien2k, Fleur and Octopus.

Wannier 2022 has been an event that put together the community behind these symbiotic packages that form a research and software ecosystem built upon the concept of MLWFs. The workshop has served the two-fold objective of teaching several techniques enabled by Wannier functions to young researchers and fostering an integration between all the packages composing the Wannier ecosystem, contrasting fragmentation and duplication of efforts.

This workshop has been generously funded by ICTP, Psi-k, MaX, NCCR MARVEL and CECAM. The computational infrastructure to run the hands-on tutorials has been provided by ICTP through their ICTP Cloud.

The workshop was run by 6 directors:

The summer school consisted of lectures and hands-on sessions on a wide range of electronic-structure methods based on Wannier functions (WF). The event targeted graduate students, early-career scientists and experienced users. The school hosted 17 speakers and 95 students (https://indico.ictp.it/event/9789/material/4/0.pdf), about half in presence and half from remote. About 30% of the participants were female, while 43% came from developing  countries, 82% defined themselves as “junior”. The school was free of charge, including the two coffee breaks a day and a standing dinner for the poster session. In addition, we have been able to cover all the expenses for a few participants from developing countries (Asia, Africa and South America). Thanks to our sponsors, we could also cover travel and accommodation (ICTP guesthouse) for all speakers. 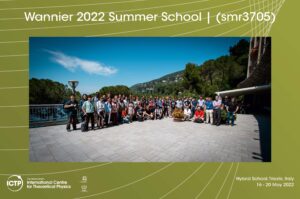 The school included highlight talks that provided a historical and broad perspective on WFs in electronic structure, a broad set dedicated lectures to the theory and methods of WFs, as well as hands-on tutorials at the basic and advanced level. The event was designed to allow participants to join both in-person and online, and covered a wide range of complex materials properties using several software packages of the Wannier ecosystem. Here the list of the lectures: 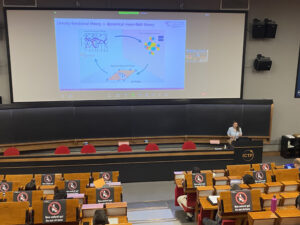 The full program can be found at https://indico.ictp.it/event/9789/, including the recordings of all lectures (also available on YouTube https://youtube.com/playlist?list=PLYc-eBoIpXTJIlUVgoqhJMa2CunCTUReR) .

Tutorials and the ICTP Cloud

Most of the tutorials were run at the ICTP Adriatico Info Lab, where all the students had access to a desktop computer. In some cases, due to the unavailability of the Adriatico Info Lab, we split the in-presence participants in two groups, one group working on local desktops in a smaller ICTP computer lab and the other group working on their own laptop in the lecture room. All Instructors  streamed the lectures while teaching assistants would take care of assisting participants in every room, with dedicated people for the online audience. The tutorials were run on ad-hoc virtual machines (VMs) hosted on the ICTP Cloud. Prior to the event, all the instructors installed their codes and tested the tutorials on a common VM that was later deployed on the ICTP Cloud (about 100 instances). Each participant got access to a dedicated VM instance on the ICTP Cloud for the entire duration of the workshop. Notably, the VM could be access both from a web browser and from SSH,  that has been fundamental to ensure that all participants would execute the tutorials on the same software environment.  No matter if the participant was joining from remote or in-presence, on the ICTP desktop computers or on their own laptop, the software environment would have been identical to the one tested by the instructors in the preceding weeks. 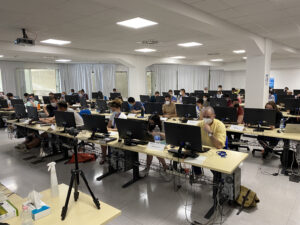 Fostering the interaction between participants

We included in the program a number of actives to encourage discussions and exchange between participants and lecturers. Although the workshop operated in hybrid mode, in-presence and remote, it has been evident that in-presence participants and lecturers could benefit from spending a lot of time together (most people stayed at the ICTP Adriatico Guesthouse) in the same place. We want to remark that — given the relatively advanced, recent and broad set of research topics discussed during the summer school — the event has been a learning opportunity also for the speakers and the school played de facto also the function of a regular workshop for the more senior attendees.

The participants of the school had the chance to present their research activity thanks to two poster sessions, one in-presence with a standing dinner (on Tuesday) and one online on gather.town (on Thursday), for a total number of 35 presentations (the poster booklet is available at https://indico.ictp.it/event/9789/material/2/0.pdf). The school lecturers and directors voted for the best poster presentation, a monetary award was given to Chakraborty Atasi for her presentation on “Berry Curvature dipole senses topological phase transition in a moiré superlattice”. In general, the level of the presentations has been judged very high by all speakers, both for in-presence and online posters.

On the first day of the week we also had a social dinner with all the instructors at the restaurant “Tavernetta al molo”, right in front of the Adriatico Guesthouse. In this occasion, young speakers had to opportunity to interact with established scientists in a less formal setting. The dinner also facilitated the start of interactions between researchers working in the broad Wannier ecosystem, who had never met each other and will eventually start to collaborate during the developers meeting the following week.

Results of the feedback form

The results from the feedback form are remarkably good, the event has received high scores on all the aspects we probed, a summary is reported in the figure below. The vast majority of participants would really recommend this school to a colleague: on a scale of 0-10 about how willing to recommend this school to a colleague, 83% of the respondents gave a mark of 8/10 or higher and 43% actually replied with a full 10/10. The school organisation and content was also rated very high, while the respondents confirmed their skills improved thanks to the event. 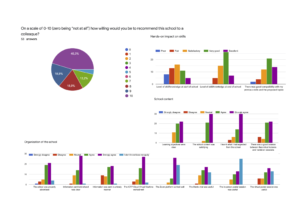 The developers meeting (second week of the workshop) gathered the community that sustains various software packages built around the concept of maximally-localised Wannier functions (MLWF), strengthening interactions between the developers and promoting a synergetic research and software ecosystem.

The meeting hosted about 40 participants (speakers included), 3/4 of them in-presence and the rest from remote. The event was free of charge, including the two coffee breaks a day and a social dinner. We have been able to cover travel and accommodation (ICTP guesthouse) for most of the speakers and a few attendees from developing countries.

The full program can be found at https://indico.ictp.it/event/9851/, including the recordings of all talks (also available on YouTube https://youtube.com/playlist?list=PLYc-eBoIpXTJqY6qlMK1Quz9E359mttJG). We had a round of invited (40′) and contributed (20′)  technical talks, 15 in total, to update all participants on current efforts in the Wannier ecosystem, while a large part of the schedule was devoted to group discussions. 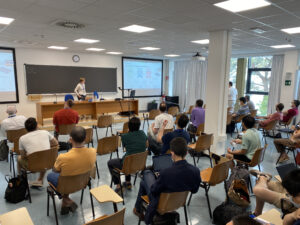 In the preceding weeks, we had collected short abstracts that covered the ideas and topics that participants wanted to discuss during the workshop. We circulated these short abstracts to all participants before the meeting started. Every day we had one or two sessions (about an hour each) of 3-min “flash talks” that helped to form several groups of 3 to 10 participants focusing on specific areas. During those flash talks, participants engaged the audience on  the abstracts submitted but also on novel ideas that emerged over the week. At the end of each flash-talk session, we formed focus groups that would work together on selected topics.

People had the opportunity to cooperate on integrating and interconnecting different packages into an organic software ecosystem, share capabilities and exchange ideas, while contributing to drawing a roadmap for future developments of the software ecosystem related to Wannier functions.

Focus group discussions on the terrace of the Adriatico guesthouse, some participants were contributing from remote on Zoom.

Beyond the technical talks, the flash talks and the focus group discussions, we also want to mention a round table discussion on Thursday afternoon where participants had the opportunity to ask technical questions, through a moderator, to the MLWF pioneers Nicola Marzari and David Vanderbilt. This was an opportunity to have a more broad discussion on WFs and an historical perspective on their development.

On the first day of the week we had a social dinner with all participants at the restaurant “Tavernetta al molo”, right in front of the Adriatico Guesthouse.

Thanks to the workshop, substantial progress has been made in several of the areas mentioned above. We discovered that several participants wanted to solve the same problems, and that often multiple software implementations—that would solve those—had been developed and needed to be merged and shared with the community. In addition, the workshop emphasised how already-existing solutions to given problem (e.g. hybrid Wannier functions) could easily be adapted to serve a very different application (in this example, device simulations of 2D materials). The was a strong consensus that these meetings are vital for the community and we might start to schedule them once every year.

Among the many technical advancements, we mention some concrete steps towards an interface between Wannier90 and Qiskit for quantum computing simulations. Important steps were made in integrating new features regarding parallelisation and the use of crystalline symmetries to reduce the computational load of wannierization procedures.

Finally, the workshop has been invaluable to share the latest updates and most recent developments in the broad Wannier functions community, which has triggered a number of collaborations that started thanks to this event.

Results of the feedback form

The feedback forms returned very positive comments, a summary is reported in the figure below. The vast majority of participants would really recommend the workshop: on a scale of 0-10 about how willing to recommend this event to a colleague, 86% of the respondents gave a mark of 8/10 or higher and 50% actually replied with a full 10/10. The organisation was rated very high and the participants confirmed the meeting reached the original goals. Notably,  the flash talks received a very enthusiastic feedback.

In general, several participants reported a very constructive and collaborating atmosphere, and they praised the combination of talks and group discussions. 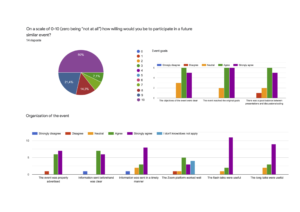