Objectives:
The aim of the school was to give a deep introduction to the theoretical and practical aspects of the electronic excitations which are probed by experimental techniques such as optical absorption, EELS, and photoemission (direct or inverse). From the theory point of view, excitations and excited state properties are out of the reach of density-functional theory (DFT), which is a ground-state theory. In the last thirty years, other ab-initio theories and frameworks, which are able to describe electronic excitations and spectroscopy, have become more and more used: time-dependent density-functional theory (TDDFT) and many-body perturbation theory (MBPT) or Green’s function theory (GW approximation and Bethe-Salpeter equation BSE). In fact, computational solutions and codes have been developed in order to implement these theories and to provide tools to calculate excited state properties. The present school focused on these points, covering theoretical, practical, and also numerical aspects of TDDFT and MBPT, non-linear response, and real-time spectroscopies. For the first time, this year we also covered theoretical aspects of magnetic excitations. Finally, a large part of the school was devoted to the codes implementing such theories (ABINIT, 2Light, DP, EXC). 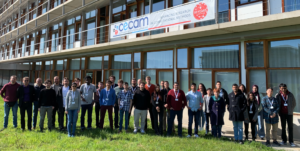 Format:
For the first time, we have proposed a hybrid format, both online and presential. i) presentation of the theory and theoretical aspects of the implementation took place in the morning sessions; these sessions took place in the Moser room at CECAM HQ, but were also streamed over Zoom, for the online participants; ii) the afternoon sessions were devoted to practical hands-on of the theory studied in the morning and were reserved to the onsite participants: DFT with ABINIT (Day 1), TDDFT with DP (Day 2), Non-linear response within TDDFT with 2Light (Day 3), GW approximation to MBPT with Abinit (Day 4) and Bethe-Salpeter with EXC (Day 5). They all took place in the Metropolis room at CECAM HQ.

Hands-on:
The practical exercises took place in the afternoon. We installed the codes (and all related and useful softwares and libraries, visualization tools) on the EPFL cluster, of which we had allocated 10 32-cores nodes for our school (Monday to Friday). The exercises were very varied, ranging from the simple codes’ tutorials (available on the web pages of the codes) to more realistic calculations (converged results for a system of choice by the student), so reflecting the heterogeneous audience: some young students were actually trying a DFT code for the first time, some others were already proficient with DFT and wanted to do “real stuff” with TDDFT and GW, for instance. The possibility to run on a cluster (with many processors at our disposal) permitted this.

General Remarks:
There were a lot of uncertainties related to the school in this post(?)-covid era. The event should have taken place in 2020 and was postponed twice, because we really wanted to have a presential event, not just an online one. However, we have, in these two years, cumulated many requests for participation. We have then decided to organize, for the first time, a hybrid event. We selected 30 participants for the onsite event and 57 other participants for the online sessions. In spite of our hesitations, everything worked out smoothly. The hybrid sessions, in the morning, were a success, thanks to a new audio/video system installed in the Moser room at CECAM HQ (even if this requires a little bit of adjusting from our side). The participation level has always been very high, and we have been glad to notice how the discussion time has always been stretched much over the allocated time, in particular for the most sensible lectures (MBPT and TDDFT).
The participation over Zoom was never very high. An average of 20 online students attended the morning sessions. However, we have to underline that: i) the lectures were recorded and put at students’ disposal on the very same day, on the CECAM website; ii) the time difference was disadvantageous for many participants, in particular those from the Americas. All in all, we are very happy with the outcome of the hybrid experiment and we will definitely consider this option in the future, but the presential part, especially for the hands-on where in many cases tutors handed the keyboards directly, is prioritary and we cannot stress enough the importance to have an event like this at CECAM HQ.

All participants attended the social dinner on Monday. We managed to organize an aperitif all together on Thursday night in the main common room.

Finally, we want to point out that the organization and the connection with Bogdan Nichita, Nathalie Carminati and particularly with Aude Failletaz were flawless (many thanks for all this).
We are looking forward to organising another event.