The third Questaal school concentrated on qsGW and DMFT using the code’s new interface to the TRIQS library.  A series of tutorials enabled the 31 participants (mostly post-doctoral researchers and lecturers) to setup and run calculations starting from density functional theory and working up to GW, qsGW, LDA + Bethe Salpeter (BSE), or the inclusion of ladder diagrams in W: qsGW^BSE, and DMFT.  The participants were encouraged to experiment with a diverse range of materials, including itinerant magnets, f-electron systems, simple semiconductors and strongly correlated insulators.

In addition to the new TRIQS DMFT capability, the school also showcased recent developments in extending the GW self-energy by including phonon contributions and the first results of the new “Jigsaw Puzzle Orbital” basis, which is a full-potential analogue of the LMTO screening transformation which is short ranged and compact while still very precise.

A series of lectures and talks accompanied the tutorials giving introductory theory and practical application of many-body perturbation theory and the GW method, given by Mark van Schilfgaarde (King’s College London) and Myrta Grüning (Queen’s University Belfast) as well as a discussion of the merits and applicability of DMFT, given by Swagata Acharya (King’s).

As in previous years, we are very pleased to have hosted two guest speakers.  Laurent Chapon (Diamond Light Source), presented the capabilities of current and next generation synchrotron sources for materials science, particularly spectroscopy, and gave an assessment of the most important current and future challenges for theory. Christoph Friedrich (Forschungszentrum Jülich) discussed in detail the nature of spin excitations in the context of the GW and GT approximations of many-body perturbation theory, including technical aspects such as the correct way to recover the Goldstone mode.  The GT approximation for the self-energy is a summation to all orders of particular 3rdorder diagrams describing spin scattering and is obtained by solving a BSE equation.  Magnon spectra and interacting band structures calculated using the GT method for elemental ferromagnets showed various interesting phenomena, in agreement with ARPES, that could be traced back to different many-body effects important in spin excitations.

The hands-on sessions were organized as guided tutorials where the participants were lead through different calculations following teaching materials and step-by-step command listings that were prepared in advance and made available on the code website. This enabled the participants to work at their own pace, to avoid getting lost, and to have a guide for setting up their own calculations.  We believe that this allowed a fairly rapid progression through the different methods and codes.  The combined King’s and Daresbury groups constituted a large team of “demonstrators” that helped participants overcome the various problems quickly and also meant that the participants could generally talk to exactly the developer involved in that area salient to their problems.

The School was financed by CECAM, Psi-k and the UK CCP9 network and this allowed us to organize modest accommodation in the center of nearby Chester.  The conference dinner was enjoyed at Daresbury’s Ring o’ Bells, a very typical “English Pub,” together with rather untypically sunny weather. 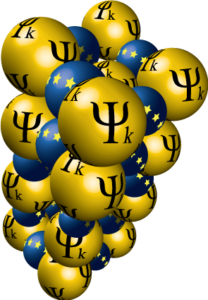