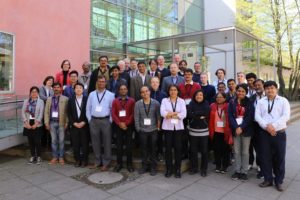 The workshop aimed at bringing together experimentalists and theorists dealing with electronic structure investigations in correlated materials. Strongly correlated materials are notoriously difficult to describe theoretically due to the competing energy scales and emerging phenomena (like the Kondo effect) coming into play while at the same time experiments can provide a wealth of results whose interpretation often proves overwhelmingly challenging. It is therefore pivotal to bring together physicists investigating such materials theoretically or experimentally, to provide a common platform for discussions and encourage mutual insight into problems and results. This workshop aimed at exactly such an information exchange. Experimentally, recent advances in angle- and spin-resolved photoemission spectroscopy and scanning tunneling spectroscopy are leading examples for providing information about the materials’ electronic structure while cutting-edge density functional theory and dynamical mean field theory have developed into powerful tools for electronic structure calculations. Strongly correlated materials of interest ranged from transition metal compounds to f-electron systems. Of particular interest were also topological materials.

The workshop was held from April 14 – 17, 2019 at the Max Planck-Institute for Chemical Physics of Solids, Dresden, with 43 participants. A total of 30 invited talks was presented. The talks consisted of 30 minutes presentations plus 5 minutes discussion time. This allowed the speakers to properly introduce their topics as well as present their results in proper detail. In many cases, however, the discussion time did not suffice, and ample discussions evolved. As this was exactly the goal of this workshop the discussions were only rarely cut short, rather the fair time for coffee and lunch breaks was, to some extent, made use of.

In order to give also some of the younger students particularly from India the possibility to introduce their results, a few (5) 15-minute talks were also scheduled. The primary goal here was for these students to gain some experience in presenting results in front of an international audience.

Out of the 35 talks, 21 presentations reported primarily on experimental results and 14 were devoted to mostly deal with theoretical insight. Recent years have seen a tremendous progress and development in angle-resolved photoelectron spectroscopy (ARPES), both synchrotron-based (e.g. the 13-facility at BESSY) as well as laser-ARPES (i.e. laboratory-based). Consequently, quite a number of talks (a total of 13) reported on results of  Specifically, higher resolution and lower base temperatures nowadays allow for the investigation of new phenomena, e.g. on heavy fermion compounds (talk by Denis Vyalikh) or Fe-based super­conductors (Sergey Borisenko). Obviously, such an enhanced and more detailed insight calls for more precise electronic structure calculations to provide guidance for an interpretation of the obtained results (e.g. talks by Benjamin Lenz and Maurits Haverkort) as well as to point out new features (e.g. talk by Fakher Assaad).

Another advanced method for experimental electronic structure investigation is scanning tunneling spectroscopy (STS), specifically when scattered standing waves can be observed (quasiparticle interference, QPI). These measurements can nowadays be conducted with micro-eV energy resolution and in the milli-Kelvin regime, even with applied magnetic field and/or for strained samples. Several talks primarily focused on STS results, with materials ranging from 3D topological insulators (Martin Wenderoth) to superconducting thin films (Pratap Raychaudhuri). Many groups employ STS as tool among many, to gain complementary insight. The particular challenge for modeling STS results is due to the excellent energy resolution, which calls for adequate theoretical description with a similar accuracy. Several talks were devoted to this goal, particularly for strongly correlated materials (incl. Roser Valenti, Konrad Matho and Anup Sakhya).

We believe that a vivid exchange between theorists and experimentalists working in the field of electronic structure determination of condensed matter becomes ever more important as well as more challenging and hence, a workshop like the AESET meets enormous scientific interest and demand. Numerous lively discussions took place and new collaboration were initiated. We think this workshop can be considered a great success in bringing together theory and experiment, researchers from many different countries working on different aspects of electronic structure determination and on different levels of their academic career. A fourth AESET being organized in two years’ time in India has been agreed upon.