The aim of the school was to give a deep introduction on the theoretical and practical aspects of the electronic excitations, which are probed by experimental techniques such as optical absorption, EELS and photo-emission (direct or inverse). From the theory point of view, excitations and excited state properties are out of the reach of density-functional theory (DFT), which is a ground-state theory. In the last thirty years, other ab-initio theories and frameworks, which are able to describe electronic excitations and spectroscopy, have become more and more used: time-dependent density-functional theory (TDDFT) and many-body perturbation theory (MBPT) or Green’s function theory (GW approximation and Bethe-Salpeter equation BSE). In fact, computational solutions and codes have been developed in order to implement these theories and to provide tools to calculate excited state properties. The present school focused on these points, covering theoretical, practical, and also numerical aspects of TDDFT and MBPT, non-linear reponse and real-time spectroscopies. Finally, a large part of the school was devoted to the codes implementing such theories (ABINIT, 2Light, Lumen, DP, EXC). 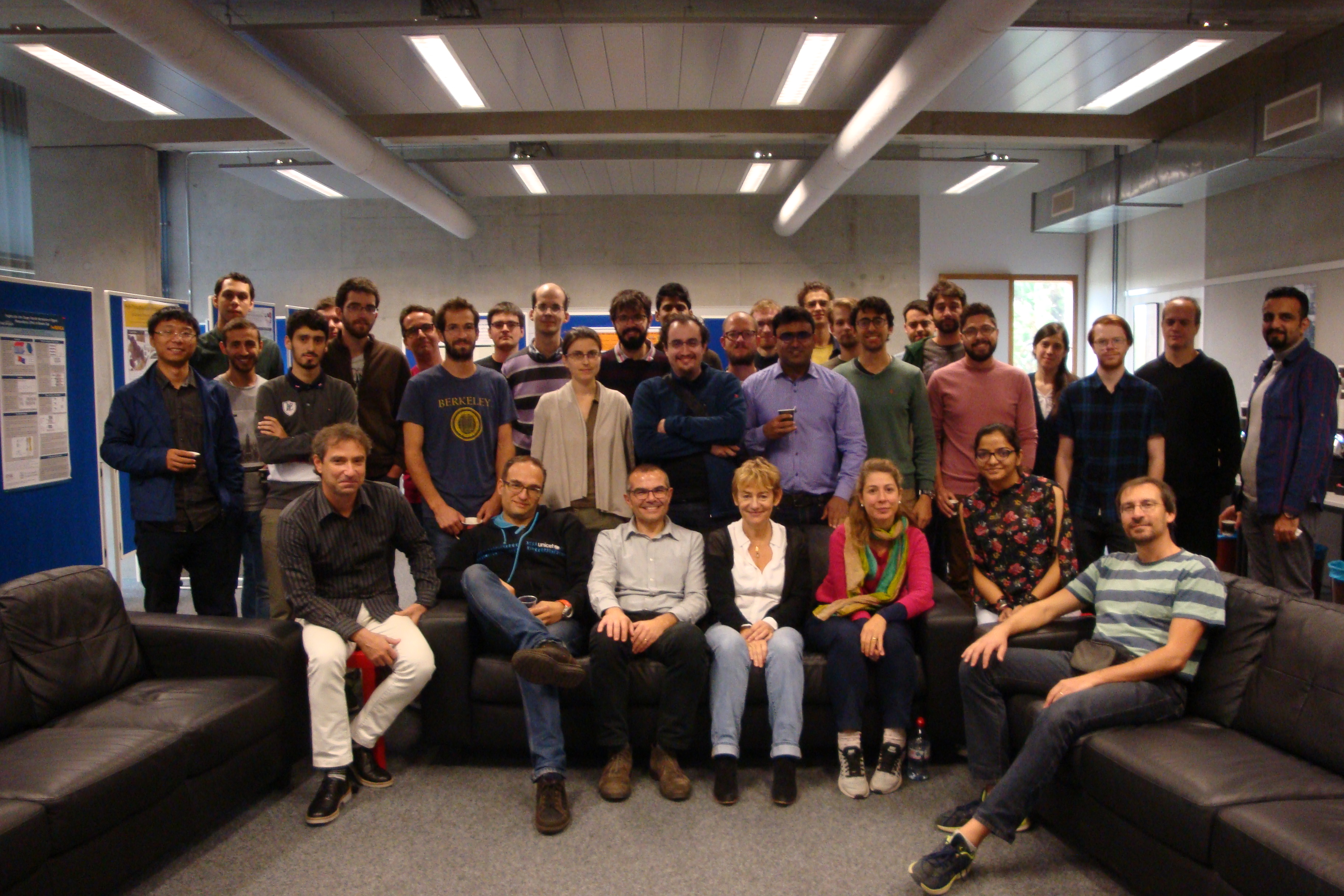 The format of the school was: i) presentation of the theory and theoretical aspects of the implementation took place in the morning sessions; ii) the afternoon sessions were devoted to practical hands-on of the theory studied in the morning: DFT with ABINIT (Day 1), TDDFT with DP (Day 2), Non-linear response within TDDFT with 2Light and Lumen (Day 3), GW approximation to MBPT with Abinit (Day 4) and Bethe-Salpeter with EXC and Lumen (Day 5).

The practical exercises took place in the afternoon. We installed the codes (and all related and useful softwares – libraries, visualization tools) on the EPFL cluster, of which we had allocated 10 32-cores nodes for our school (monday to friday). The procedure to reach the cluster is a bit heavy (it’s not Cecam’s, but of the EPFL), but after some misunderstanding on monday afternoon, everything procedeed smoothly.
The exercises were very varied, ranging from the simple codes’ tutorials (available on the web) to more realistic calculations (converged results for a system of choice by the student), so reflecting the heterogenenous audience: some young students were actually trying a DFT code for the first time, some others were already proficient with DFT and wanted to do “real stuff” with TDDFT and BSE, for instance. The possibility to run on a cluster (with potentially many processors at our disposal) permitted this.

From the organizers’ point of view the school has been a frank success. Thanks also to the cumulated experience of last editions, and to a good team-work among tutors, the lectures have been largely considered appropriate in length, complexity and clarity, by the students. The participation level has always been very high, and we have been glad to notice how the discussion time has always been stretched much over the allocated time, in particular for the most sensible lectures (MBPT and TDDFT).
Another element that helped creating a nice atmosphere and engaging the students was the use of real-time games (using web platform like Kahoot and Quizizz): this competition/game support permitted both to check the general level of the students’ knowledge on certain topics, and to create an engaging situation among students (everybody wants to win a game, when playing). The final results and ranking created discussion, questions by sometime astonished students, and curious/creative comments. It was overall entertaining and useful. The school was originally designed to host 20-22 participants, but given the number of request (made by highly qualified students) we have increased the number of participants to 30. In order to increase the discussion and connection among students (and also between students and tutors) we asked the students to bring a poster of their research (not obligatory).

All participants attended the social dinner on Tuesday. We managed to organize another event all together on thursday night.

Finally, we want to point out that the organization and the connection with Charlotte Sterling, Bogdan Nichita and Nathalie Carminati (at Cecam HQ) was flawless (many thanks for all this), and we have no problems to report.

We are looking forward to organising another event in a couple of years.