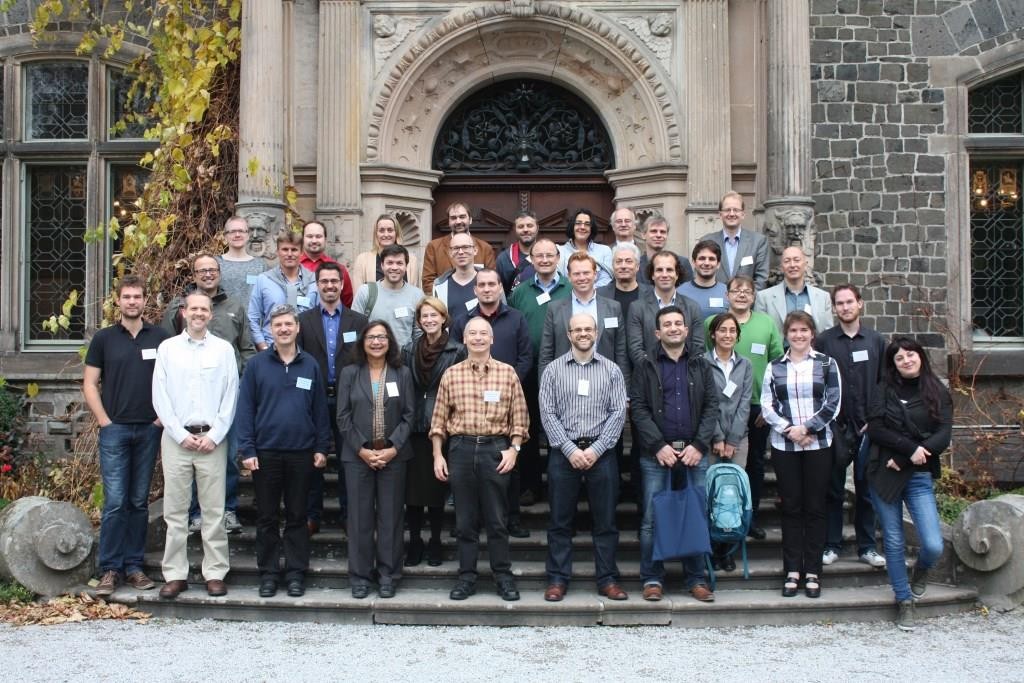 The controlled growth of thin films based on metastable materials by chemistry‐driven processes is of high technological importance for topics like semiconductor devices or optical coatings. Computational modelling of this inherently multiscale process is crucial for an atomistic understanding and enables a decoupling and separate optimization of the growth‐determining factors of non‐equilibrium materials. The challenge faced for modelling of these complex phenomena is the coverage of various length and time scales and the necessary close interaction with colleagues from the experimental sciences who are able to outline the most pressing open questions.

This was the starting point to initiate the SimGrow workshop.

The first workshop of this kind was held in November 2015 in the beautiful 19th century castle of Rauischholzhausen in the middle of Germany, close to the city of Marburg. 36 participants from Europe, Russia and the US created a vibrant atmosphere with plenty of intense scientific discussions across disciplinary borders. According to the challenges outlined above, experts in experimental thin‐film growth outlined the state‐of‐the‐art in growth and in‐situ spectroscopy for growth techniques like atomic layer deposition (ALD) and metalorganic vapour phase epitaxy (MOVPE). Strategies on how to tackle these challenges were presented by theoretical chemists and physicists developing and applying approaches as diverse as density functional theory (DFT), kinetic Monte Carlo (KMC), classical or ab initio molecular dynamics (MD) or
computational fluid dynamics (CFD).

For the first time, scientists from these diverse fields involved in thin‐film growth modelling were brought together. The ambitious aim to ask experts from experimental and theoretical chemistry and
physics as well as material science to present their state‐of‐the‐art of research not only to their community fellows but to a broader, interdisciplinary audience was fully reached. Every speaker went
to great efforts to explain their respective approaches to non‐experts in his or her field to foster intense scientific discussions, which took place during the ample discussion time after the talks, during the poster session or simply on the alleys in between talks.
Several bilateral collaborations were discussed during the workshop. Beyond this, the co‐organizers agreed on intensifying the collaboration in the future to exchange ideas on computational modelling of ALD and CVD growth as well as bringing together scientists in the field more often. Furthermore, the workshop increased the visibility of the theoretical and computational sciences in the COST action HERALD.

The field will in the future need to grow beyond the “one method”‐approach mostly applied today. While there are experts in DFT or KMC or CFD, efforts to combine these methods to cover the length
and time scales necessary for growth simulations are scarce. Some first results on the combination of two methods have been presented but a true “multiscale” approach will need to be aimed at. This is clearly required for metastable materials, since chemical reactivity plays a major role and needs to be described on an ab initio level. Furthermore, it became clear that without detailed information from experiment (e.g. by in‐situ spectroscopy), the number of variables for computational modelling can be too large.

Thus, the community needs to communicate to our colleagues from the experimental sciences which information we need to model these systems adequately. It transpired that a joint effort is required to approach the complex physical and chemical phenomena
taking place in thin‐film growth at low temperatures, which are required for metastable materials.

Scientists from communities coming together usually in separate meetings unanimously agreed that such an interdisciplinary workshop is extremely valuable for mutual exchange and should be held again in the future.