The third Berlin edition of the “HoW exciting! Workshop on excitations in solids” was a very successful event. It took place in the Campus Adlershof of the Humboldt-Universität zu Berlin. The subject of the workshop, namely excitations in solids, is extremely up-to-date, attracting the attention of a vast interdisciplinary community. Technological applications based on excitations in solids are closely interconnected with the fundamental physical mechanisms ruling them. A deep understanding of such basic properties is therefore essential and makes the role of theory crucial in this respect. Assessing the state of the art of the theoretical approaches to address excited-state properties of materials and establishing their link with the most recent experimental observations were the main goals of this workshop, which can be considered successfully achieved.

The even was organized in two main blocks: 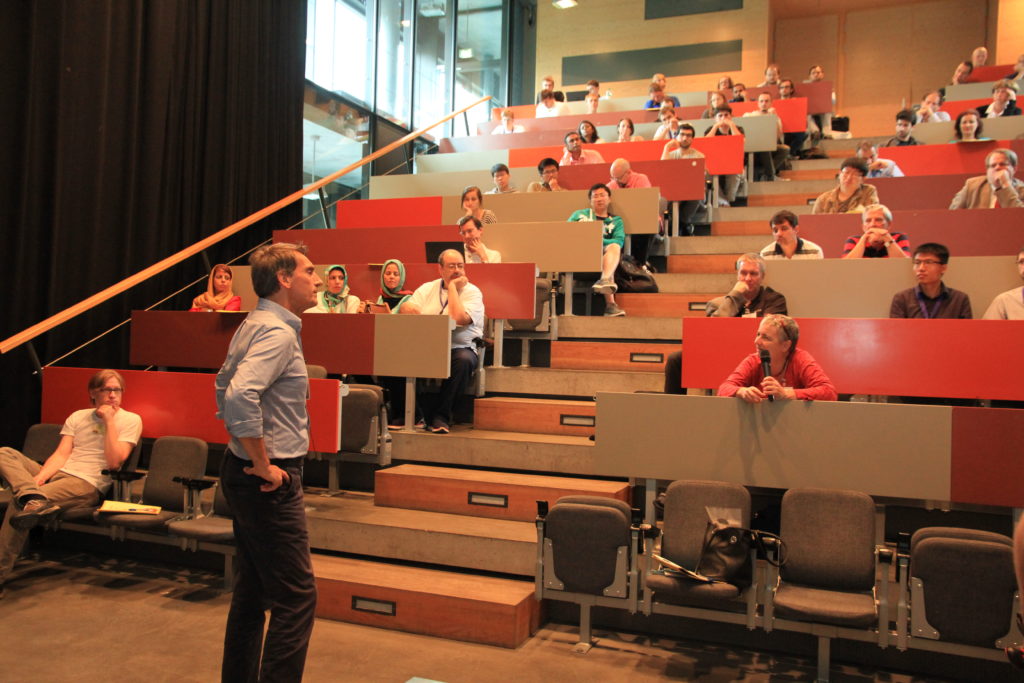 Different aspects of the complex landscape of excitations in solids could be addressed and discussed, from both an experimental and a theoretical perspective. Specifically, the fundamental physical mechanisms ruling the response of materials to an external perturbation were the subject of the sessions Quasiparticles and Beyond, Transport and Spin, Spectroscopy, and Core-Level Excitations. Basic concepts introduced in the keynote lectures were supported by state-of-the-art study cases. In the session Theoretical Methods for Excitations advanced methods for a theoretical description of complex excitation processes in materials were presented, while in the session Electron-Phonon Coupling, the relevant aspect concerning the coupling of different types of excitations was discussed exhaustively. The possibility of tailoring bulk crystals into low-dimensional systems and nanostructures has enormously increased the possibilities to tune the energy range and the intensity of their excitations in view of specific application, as discussed in the session Excitations in 2D Materials. This aspect becomes particularly important in the field of photovoltaics, as discussed extensively in the session Excitations in Photovoltaic Materials. 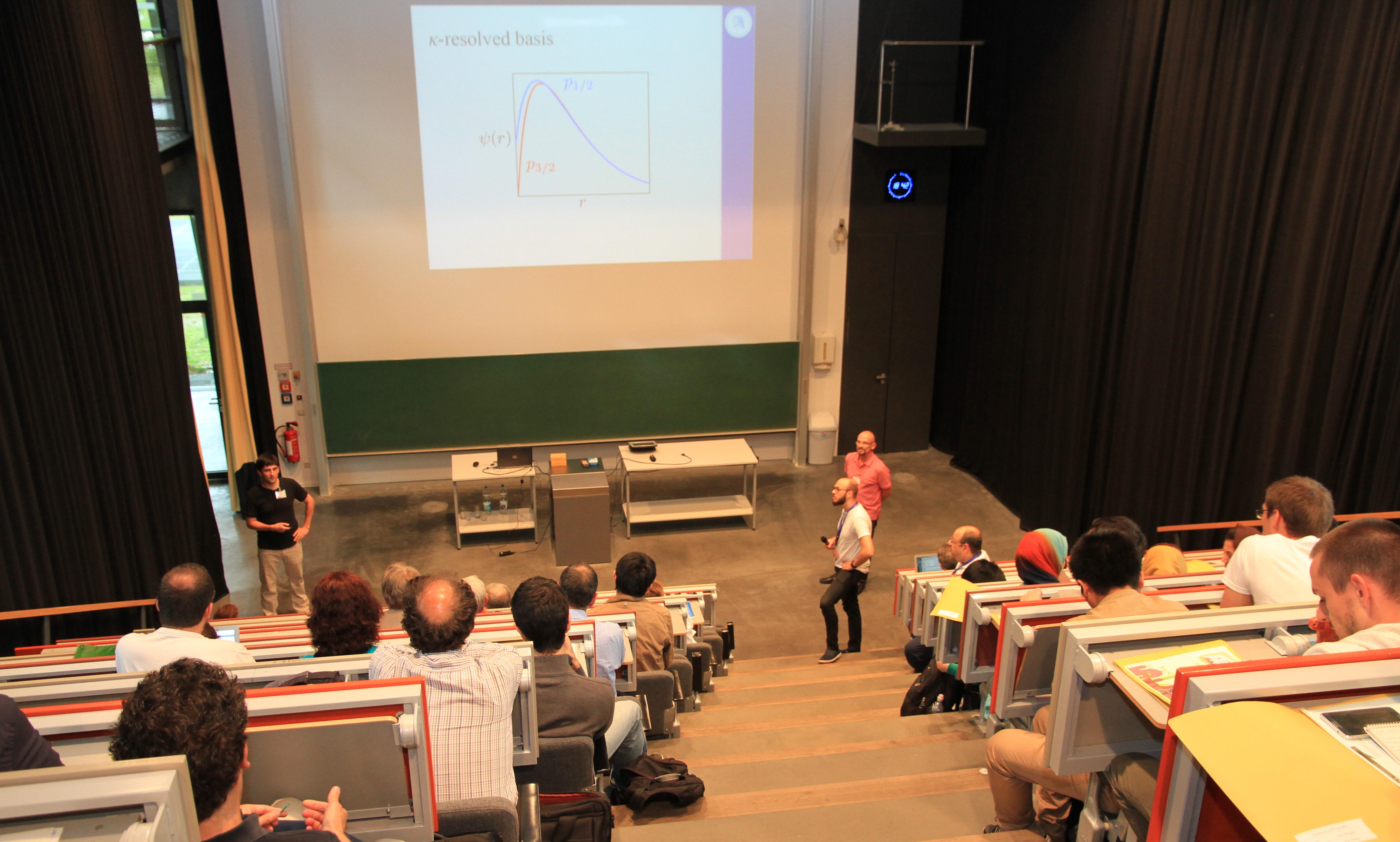 Electronic-structure-theory methods had a prominent relevance in the workshop. The outstanding power of density-functional theory (DFT) to assess and predict crystal structures and ground-state properties of almost any material emerged in the majority of lectures and contributions. Besides the successes, also the limits of this approach were extensively discussed and analyzed. The treatment of excited-states properties is one of the most apparent failures of DFT. Electronic correlations, van der Waals interactions, electron-hole pairs, and out-of-equilibrium phenomena indeed require theoretical treatments that go beyond a mean-field approach. The increasing complexity coming naturally with advanced methods such as time-dependent DFT, dynamical mean-field theory and many-body perturbation theory was extensively addressed during the workshop. A crucial aspect that was extensively addressed in this scientific event is the interconnection between theory and experiment in describing complex excited-state phenomena occurring in solids. Advances in theoretical and computational condensed-matter physics need to be reflected in the novel experimental techniques, in order to give rise to new scientific breakthroughs. This issue emerged naturally during the scientific contributions and the discussions among speakers and participants with such a diversified background, and was carefully considered from both the theoretical and an experimental perspective. These exchanges greatly enriched the workshop as a whole and represented an added value for the participants, which will possibly be reflected in their future research work.

These topics well reflected the state of the art of theoretical and computational approaches to describe excitation processes in solids. This was further complemented by an extended overview about the most recent advances in the experimental techniques to probe and detect complex phenomena on different time and energy scales. At the same time the workshop provided an excellent opportunity to discuss future perspectives in the field of excitations in solids, to go beyond the current status quo in terms of methodologies and applications. The presence of prominent scientists, representing different fields in both theoretical and experimental condensed-matter physics, spontaneously triggered fruitful exchanges also in view of future collaborations.

The hands-on tutorial based on the exciting code reflected all the aspects discussed in the conferences. Participants had the opportunity to put their knowledge into practice with the help of the tutorials of the code. A new release of exciting, named carbon, was published for the workshop.

The audience was very diverse, making the event very lively and stimulating. Among the approximately 70 participants, almost 30 nations were represented. While, on the one hand, this is an indication of the international relevance of the topics addressed in the workshop, on the other hand, such a diversity contributed to large extent also to the lively cultural and scientific exchange that took place during the workshop. One fifth of the oral contributions (including invited lectures) was given by women, who represented 25% of the all participants. This proportion is unfortunately in line with the average under-representation of the female gender in physics and in the other related disciplines.

The social program effectively complemented the scientific one, by promoting further exchange among the organizers, the invited speakers, and the participants. Coffee breaks and meals organized in loco helped socialization and thereby promoted scientific discussions, which contributed essentially to the success of the workshop. For the invited speakers, a social dinner was organized in the relaxing atmosphere of an urban garden downtown Berlin. This was an excellent opportunity to tighten existing scientific connections and foster new collaborations. For the younger participants a Korean Burger evening was organized in parallel. 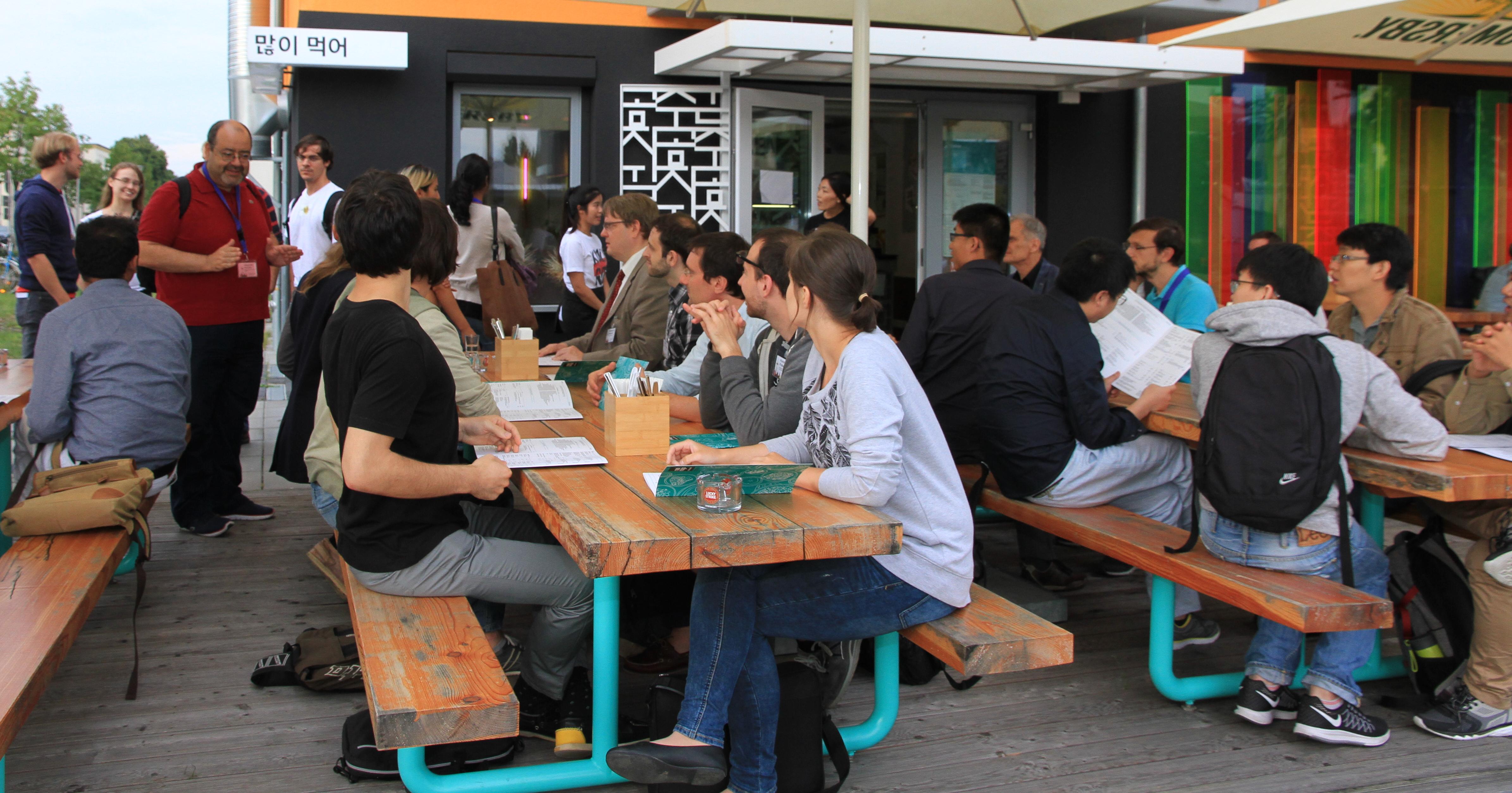 On the last evening of the hands-on tutorial, as a farewell party, a barbecue took place on beach at the Müggelsee, the largest lake of the Berlin area.

The workshop received a very positive feedback from invited lecturers and attendees. On the last day participants were asked to fill in a questionnaire, answering questions about the scientific merit of the event and its organization. A very positive evaluation was given to the program as well as to the quality of the posters and oral contributions, with a particularly positive emphasis on the merit of the keynote lectures. Lecture slides and tutorial talks are publicly available within the exciting webpage.