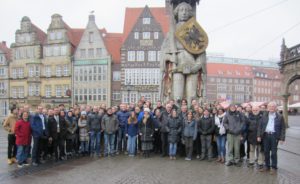 Electrons in real materials are subject to Coulomb interaction among each other. This interaction is long-ranged, gives rise to correlation effects, and often poses fundamental problems in ab initio simulations of real materials. A nowadays commonly used ab initio approach for strongly correlated materials is the augmentation of density functional (DFT) based methods with many-body treatments of the Hubbard model, such as the combination of DFT and dynamical mean field theory [1]. This approach, however, neglects all correlation effects stemming from non-local Coulomb interaction, since the Hubbard model only includes the on-site part of the interaction. Combining more sophisticated diagrammatic ab initio methods (GW) with methods and models which contain the long-range contributions of the interaction (EDMFT) [2] alleviates these problems in part but comes with the introduction of further approximations. Assessing the quality of such approaches is currently hampered by the fact that even the extended Hubbard model, which is the minimal many-body model capturing explicitly non-local interactions, is at best partially understood.

The treatment of the extended Hubbard model, a standard model for the study of simultaneous strong long-range and local interactions, has been subject of numerous investigations throughout the last decades. Studies using various methods have revealed different electronic phases such as metallic, magnetic, superconducting, and charge ordered phases. The used methods include quantum Monte Carlo, weak coupling, mean-field approximation, second-order pertubation, random-phase approximation, fluctuation exchange, bosonization, renormalization group, GW+EDMFT, dual boson, TRILEX, cluster extensions of dynamical mean field theory as well as variational approaches (see Ref. [3] and references therein). Despite the large number of methods used to study the extended Hubbard model, the understanding of correlated electron phenomena in systems featuring prominent non-local interaction is currently only emerging and far behind our already very detailed understanding of models like the Hubbard model with strictly local interactions. Indeed, electronic phase diagrams, excitation spectra, and excited state dynamics of correlated electron systems with non-local interactions remain highly controversial. For the Hubbard model complementary methods have been recently shown to converge to the same results [4]. This is currently not the case for the extended Hubbard model. For instance the semi-metal to insulator phase transition line on the honeycomb lattice as obtained from quantum Monte Carlo and dynamical cluster calculations differ in many aspects.

Ab initio quantum chemistry methods offer an alternative route to describe electronic correlations in materials [8, 9, 10, 11]. In this framework, coupled-cluster theory [9] is an example of a well-studied and systematically improvable hierarchy within which certain classes of Goldstone diagrams are summed. Electronic excitations are obtained by equation-of-motion coupled cluster (EOM-CC) theory. Recently, several groups have explored the possibility of applying this approach, which traditionally was only used to model molecules, to extended systems, such as the homogeneous electron gas or semiconductors. When applied at the double excitations level, the diagrammatic content of EOM-CC goes significantly beyond the standard GW method, but the increased scaling of such calculations (going with the sixth power of the system size) makes convergence difficult and highlights the need for improved algorithms and computer codes. Another particularly promising approach to addressing extended from the quantum chemical side is the FCI quantum Monte Carlo (FCIQMC) method [8], which sample many-electron wave functions stochastically.