Ab-initio prediction of thermal properties for condensed matter has been a blossoming field in the last few years, thank to its numerous applications mainly in thermoelectric materials and heat dissipation technologies. This methodology however does require to master a certain amount of expertise, both technical and theoretical, in order to be executed rigorously and efficiently. In this school, we wanted to provide an in-depth view of the theoretical framework, without neglecting the importance of applying the theory on some practical examples.

The school has been composed of theory sessions and hands-on tutorials suitable for anybody with graduate-level knowledge of condensed matter physics. As we planned to release all the software with an open-source license just after the end of the school, it was extremely useful for us to collect some feedback from this first batch of users. 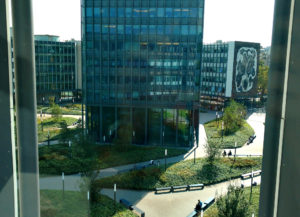 The school started in the Jussieu campus on a sunny Monday morning, with around 40 participant from all over the world, many overcoming the difficult task of obtaining a French visa.

For the first two days we took every participant to a working-level knowledge of density functional theory. We treated the basic theory and the most common technical challenges of a plane-wave calculation, such as construction and optimization of simulation cells, choice of functional and pseudopotentials, convergence with basis set cutoff and k-points sampling. We also reviewed the Density Functional Perturbation Theory, that allows one to study monochromatic vibrations, phonons, of any wavelength without the need to construct large, expensive supercells.

In the afternoons, teaching moved to a computer room where the students could work, alone or in groups of two, on a series of practical exercises, focused on the issues covered during the morning. Each step of the exercises was introduced by a short explanation by one of the lecturers, then, all the lecturers would work with the students answering their questions, discussing the results and possible extensions and applications of the exercises. These exercises, after having been revised and corrected, are now bundled with the software distribution.

Between the morning and afternoon session, we organized a simple lunch (sandwiches, cakes and beverages) instead of letting the participants disperse to the numerous eateries that surround the Jussieu campus: to keep the schedule under control, to stimulate discussion at to enable the participants to spend more time with the lecturers.

Core topics of the School 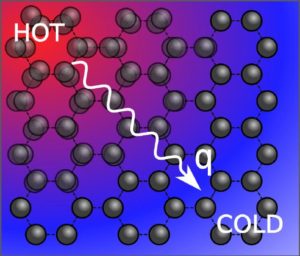 The core focus of the school came on the third and fourth day, where we approached the more advanced topics. Several interesting phenomena cannot be accounted in a purely harmonic model because of one key limitation: phonons are stationary states of the harmonic Hamiltonian, they do not interact with each other in a harmonic crystal. Furthermore, they are bosonic quasiparticles, hence there is no limit to the amount of heat they can carry. In other words, the thermal conductivity of a perfect harmonic crystal is always infinite. In order to have a realistic description, anharmonicity has to be taken into account.

Unless a system is close to its melting point, anharmonicity can be treated perturbatively. The lowest term in perturbation theory requires the calculation of three-body force constants, i.e. the derivative of the total energy with respect to three harmonic perturbations. These derivatives can be computed from first principles using the “2n+1” theorem, which allows the calculation of both 2nd and 3rd order derivatives just by the knowledge of the first order wave function response. Phonon lifetimes can be obtained integrating all the phonon-phonon scattering processes, their probability is proportional to the 3rd derivative of the energy. 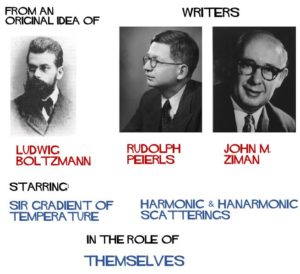 On the fourth day, we focused on solving the Boltzmann equation for phonons. Once we are able to compute phonon-phonon scattering, we have in principle all the elements, but we need to invert the scattering matrix, linking any phonon to all the others, which is a difficult problem in itself. It can be tackled in two ways: A simplified approach assumes thermalisation to be instantaneous, it is the so-called single-mode approximation (SMA), and it can be applied successfully to most materials. However, one side effect of the SMA is that it neglects the correlations that arise between phonons when a heat current is formed. That leads to the formation of collective phonon excitations and exotic second sound, or heat waves. To describe the effects beyond the SMA, one must employ more advanced techniques that take into account the complete phonon-phonon interaction matrix for an exact solution of the BTE.

The hands-on sessions for the third and fourth day where quite a bit more challenging than the first two. As yet unreleased software worked correctly on the lab computers, it did have some glitch for those students who chose to use personal laptops. Also the computing time required to have properly converged results is many orders of magnitude to what we had available. Yet, all the students could make it to the end, gain some insight about the code and have the opportunity to ask plenty of questions.

Following the end of the school we took a couple of weeks to revise the code and its documentation, trying to tackle the issue that our students faced. We also revised the exercises that were assigned in the afternoons, and completed them with long descriptions of the tasks and comment about the expected outcome and conceptual problems.

Around the end of June, we finally released the first code version, under the GPL open-source license, together with the slides of the lectures. We simultaneously set up a mailing list to collect any help request that we may get and announce new versions of the code, the mailing list has currently about 30 members.

Also in the scientific commitee: