Abruzzo is the wildest region of Italy, covered by several national and regional parks. The landscape is mostly mountainous and dominated by the Gran Sasso massif, hosting the highest peak of the peninsular Apennines. In this area one can find several medieval towns that attract tourists from all over Europe. Among those, Santo Stefano di Sessanio stands out as an ideal spot for a scientific meeting. It is located at 1250 meters above the sea level and offers a relatively fresh weather, with respect to the hot Italian summers. It is not easy to reach, but this is not a negative feature. Being far from any distraction makes it easier for researchers to focus on science, favoring exchange and collaborations. Finally, Santo Stefano is also located at a close distance from the Universities of L’Aquila, Chieti, Rome and Camerino, therefore easy to reach for local participants. In these settings, we held the “Workshop and hands-on school on the full-potential linear muffin-tin orbital method and dynamical mean-field theory”, from Monday, June 4th to Friday, June 8th. A total of 30 participants attended this event, leading to a very interesting discussion on various topics of computational physics. A brief overview of the scientific discussion is presented below, including also links to all available presentations. The most organic discussion was focused on spectroscopy, whose computational theory for solids has significantly advanced in the last few years. In parallel to the afternoon sessions, hands-on tutorials to learn the full-potential linear muffin-tin orbital code RSPt were held. Several students, as well as a few senior scientists, attended the tutorials. Non-scientific activities included an evening trip to Rocca Calascio on Tuesday, just after the end of the afternoon session. Rocca Calascio is a mountaintop fortress, which was also featured in the Hollywood movie Ladyhawk. 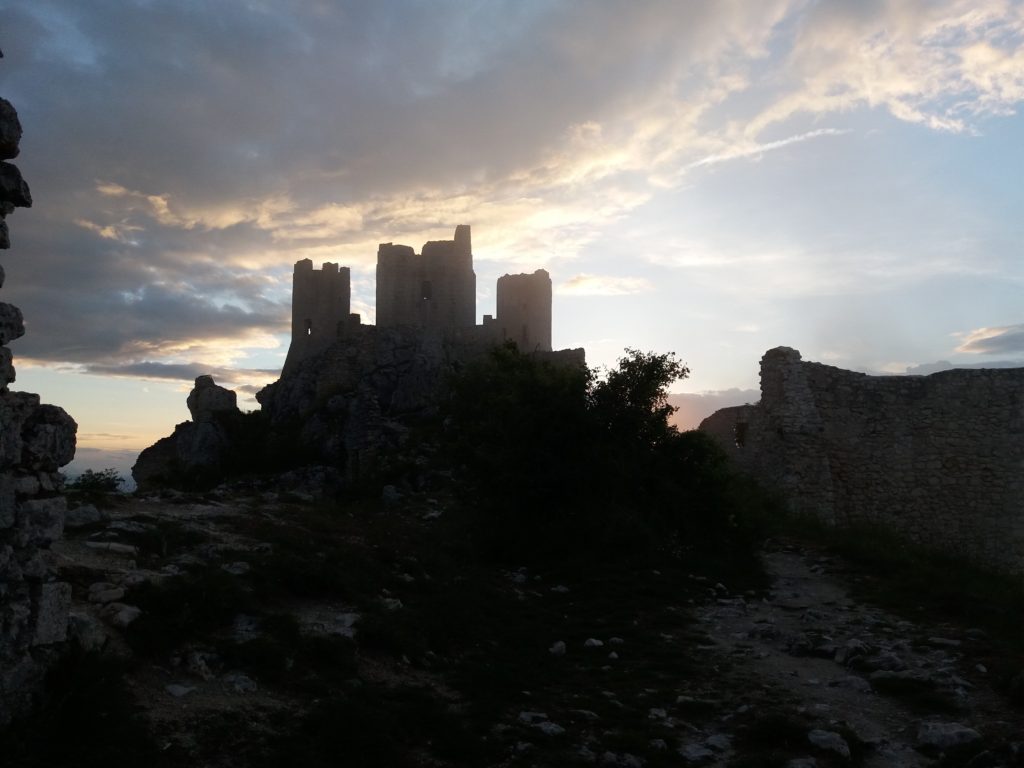 While most participants reached the small town just below the fortress by car, a few brave scientists decided to hike through the mountains, following the historical roads of transumanza, i.e. the back and forth trip between Abruzzo and Puglia that shepherds were undertaking in the past, following the seasonal changes. 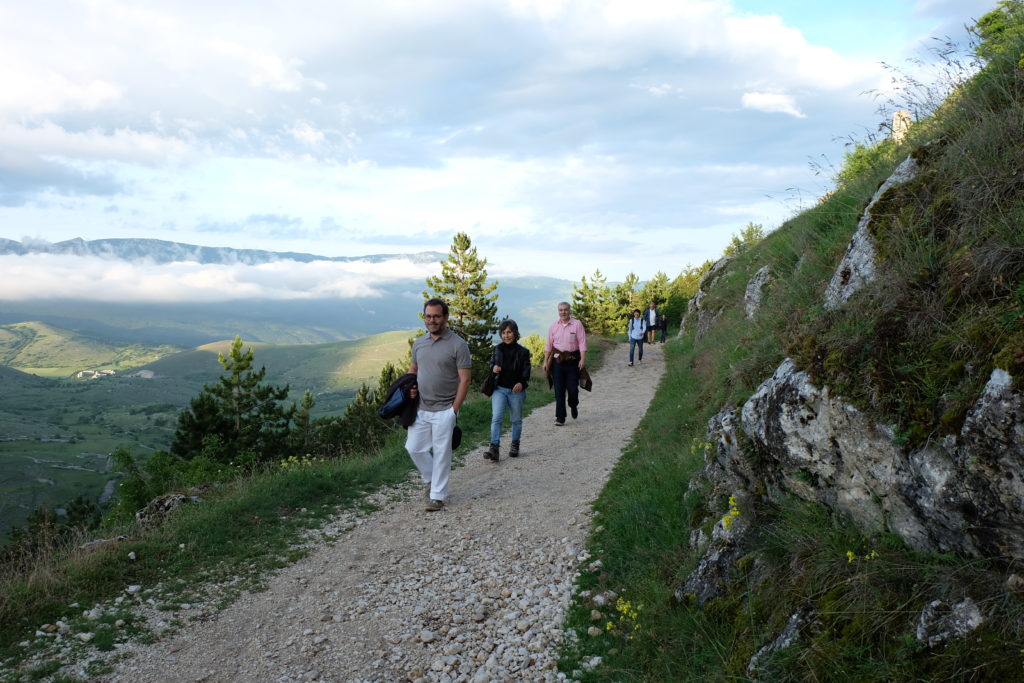 On Wednesday afternoon, an excursion was organized to Campo Imperatore. The “Field of the Emperor” is a large plateau in the mountains, whose widespread nickname is “the little Tibet”. Traditionally Campo Imperatore hosted summer pastures for sheep and cows, but nowadays is also a famous area for hiking, climbing, paragliding and horse riding. A bus trip of 1.5 hours led us through the plateau and up to the astronomical observatory at 2100 meters. From there some people hiked on top of the closest peak, reaching the mountain hut “Duca degli Abruzzi”, where they could observe the entire valley hosting L’Aquila and other towns. 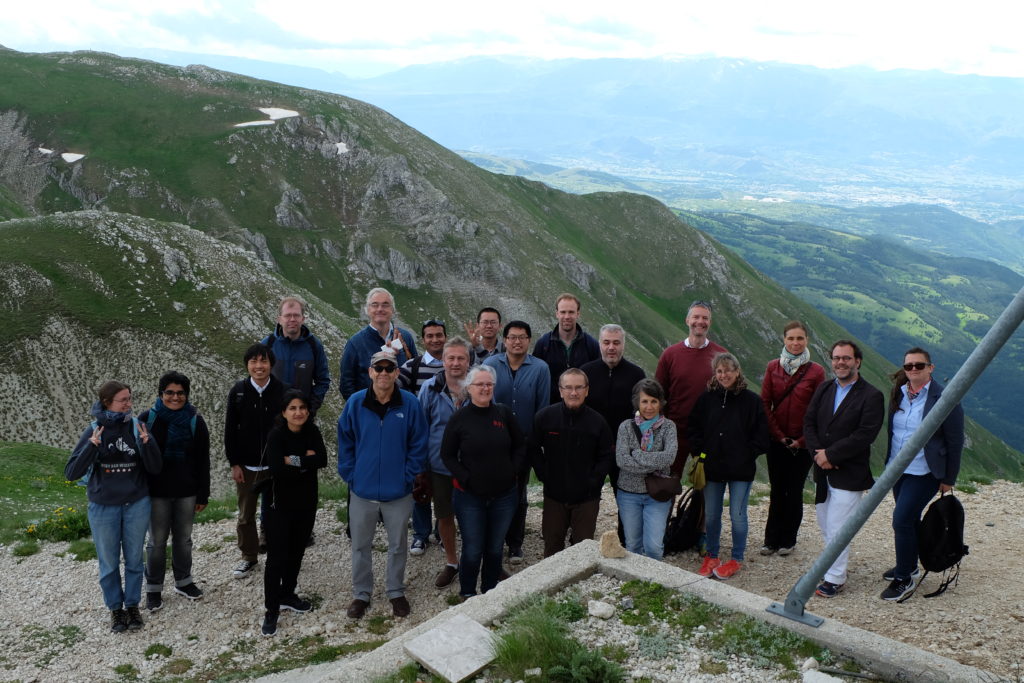 The meeting was organized by the community of developers of the electronic structure code RSPt. The event was financially and organizationally supported by the Psi-k charity, the Universities of L’Aquila and Uppsala, and the Gran Sasso Laga national park.

The morning session of Monday 4th was an introductory session to the full-potential linear muffin-tin orbital (FP-LMTO) method. John Wills presented a brief history of the electronic structure code RSPt, from its genesis to the latest developments. An interesting discussion was initiated on using all-electron methods, and FP-LMTO in particular, to generate pseudo-potentials to employ for large scale simulations and/or output extraction. In the next talk, Ann Mattsson presented the latest advances in exchange-correlation functionals for density-functional theory (DFT). She focused on her idea on using the electron localization function to obtain adaptive functionals that can refer to different models for different type of electronic densities. The afternoon session was instead dedicated to more practical applications based on electronic structure calculations. Barbara Brena and Diana Iuşan presented their recent results for molecular magnets and magnetocalorics. Diana Iuşan also presented very recent developments in establishing a theory of spin-lattice dynamics fully based on first-principles calculations. After the coffee break, Leonid Pourovskii introduced one of the major themes of the workshop, i.e. the treatment of 4f electrons in rare-earth elements and compounds. The treatment of the crystal field splitting in dynamical mean-field theory (DMFT) without ad-hoc assumptions was the most interesting subject of debate. Leonid Pourovskii also presented a new method to evaluated inter-atomic exchange interactions without a magnetically broken solution. This new method can find many applications in the study of rare-earth based permanent magnets. Finally, the last talk of the day was made by Anna Delin, who discussed her most recent projects on high throughput calculations for systems with a double perovskite structure. 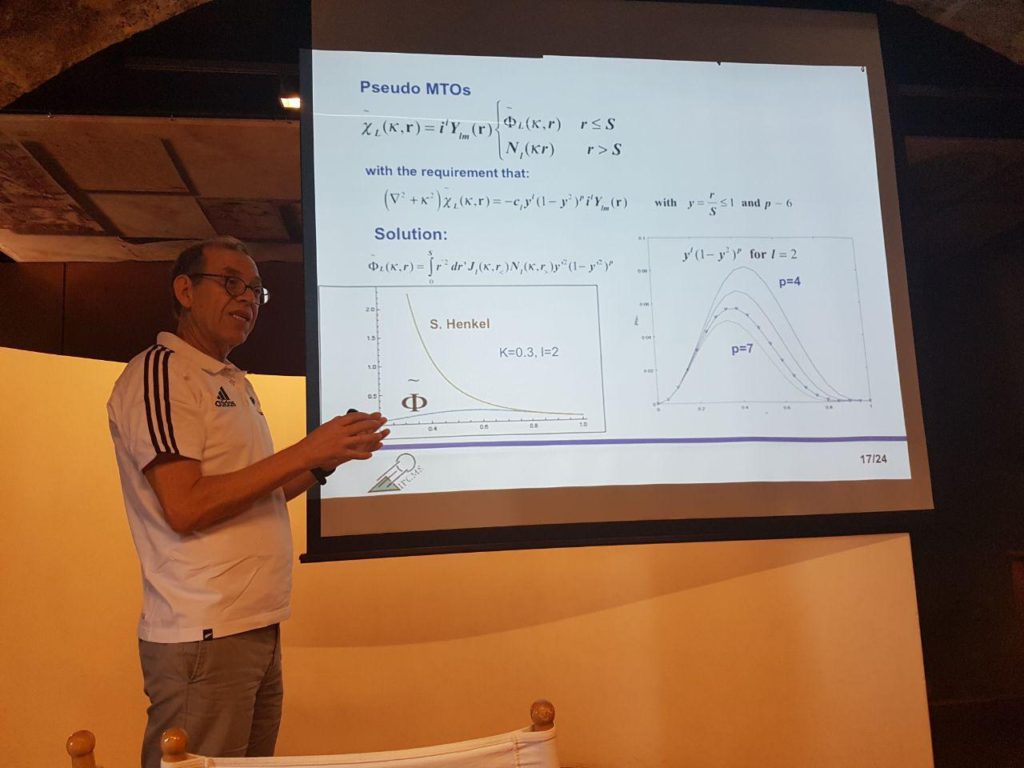 The morning session of Tuesday 5th was dedicated the spectroscopy. Johan Schött first presented his most recent theory of X-ray absorption processes in solids, based on a combination of DMFT and exact diagonalization techniques. Although this theory still suffers from having a few external parameters to be the final answer to the problem of core-level spectroscopy, there has been a substantial advance with respect to previous attempts. Jindrich Kolorenc presented a similar formalism but for resonant X-ray emission. In the next talk, Akihiro Koide illustrated that for K-edge transitions from the core levels, the final spectra depend not only on local degrees of freedom, but also on the hybridization with neighbouring atoms. The final talk of the morning session, by Mebarek Alouani, was instead dedicated to the basic theory of FP-LMTO. The idea, discussed in the previous day, of using FP-LMTO to obtain tailored pseudopotentials was illustrated in more details, giving also a didactic interpretation of several quantities involved in the FP-LMTO formalism. After lunch, the first part of the afternoon session was dedicated to models of photoemission. Jan Minar presented an overview of the one-step model for photoemission and its combination with DMFT. Recent results on strongly correlated materials and topological insulators were presented. Iulia Emilia Brumboiu investigated the role of corrections beyond the dipole approximation to photoemission spectra. Her approach was so far applied to molecules, but can be easily extended to solids. After the coffee break, Heike Herper showed how the computational framework of DMFT can be used to obtain physical information even without solving the (computationally demanding) many-body problem. Focusing on a family of Ce compounds, she was able to find a significant correlation between the DFT-based local hybridization function and the localized/itinerant character of electrons. Within the subfamily of systems exhibiting Kondo physics, this approach could also be used to estimate trends in the Kondo temperature, providing a tool for high throughput applications. The final talk of the day, by Olga Vekilova, was dedicated to the problem of calculating the magnetocrystalline anisotropy. Materials investigated were Fe3Sn-based alloys in presence of a set of phase stabilizers, such as Si, P, Ga, Ge, As, Se, In, Sb, Te, and Bi. Presented results will find application in the constant search of more efficient and economical permanent magnets. 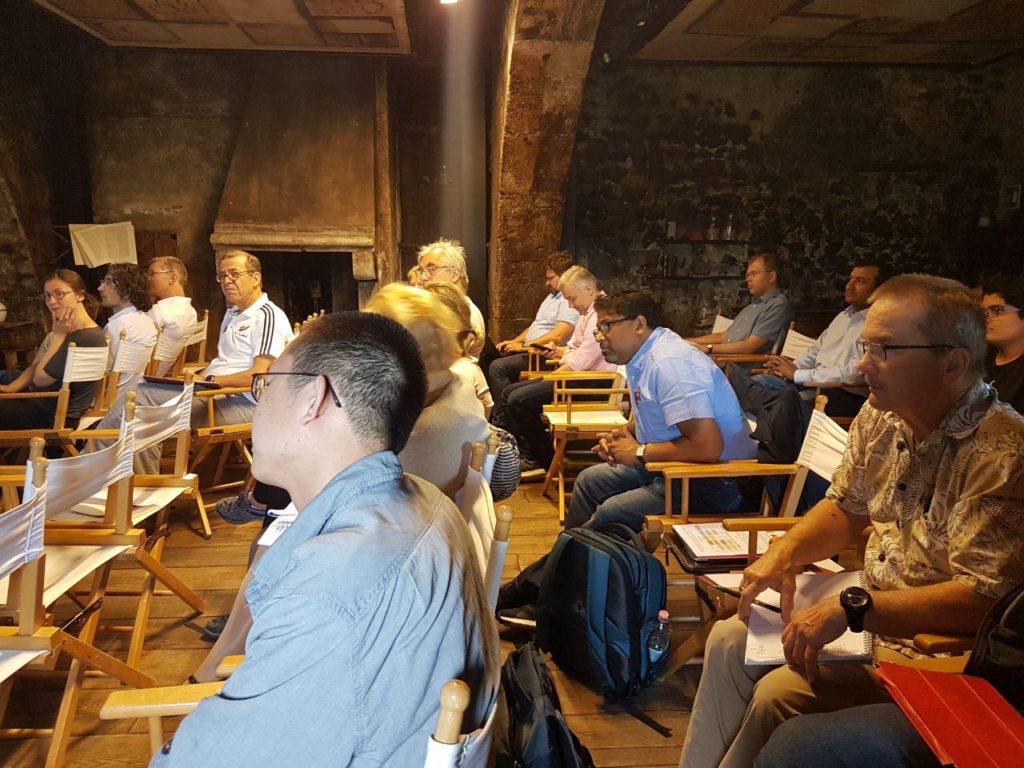 The morning session of Wednesday 6th started with a methodological talk by Samara Keshavarz. She investigated how calculated magnetic properties of transition-metal oxides depend on different ways of treating spin polarized densities. Her results emphasize how technical details are crucial for a physically sound interpretation of calculated results, and are in line with a series of works by a well-known group based in the USA. Lars Nordström presented recent developments in the modern theory of magnetism. His main focus was the nature of the orbital magnetism and how it can arise from non-collinear systems, even without spin-orbit coupling. Recent findings in solid state theory emphasize how computational approaches have yet to be improved to describe non-trivial phenomena related to the orbital magnetism. After the coffee break, Gianni Profeta talked of charge-density waves in a partial monolayer of Pb on a Si (111) substrate. The complex interplay between strong spin-orbit coupling, correlation effects, disorder and substrate interaction makes systems like this challenging to study, but prone to reveal novel phenomena. Finally, in the last talk of the day, Lars Eriksson reported on using electronic structure theory to predict new crystal structures, which is particularly important when experimental data get too complex or uncertain to draw definite conclusions. There was no afternoon session, as all participants attended the bus tour and the excursion to Campo Imperatore. Scientific discussions obviously continued until (and during) the social dinner! 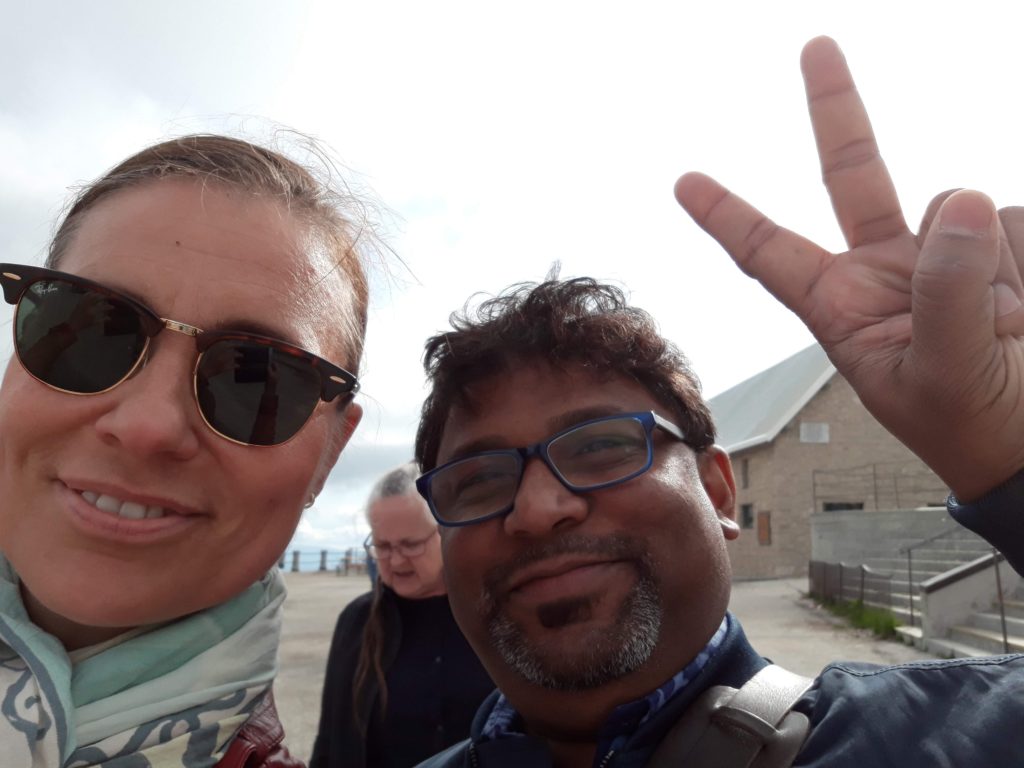 The morning session of Thursday 7th was dedicated to arguments with a strong overlap with many-body theory. Patrik Thunström discussed his recent results on the topological character of SmB6, presenting also a series of interesting technical developments for the DFT+DMFT implementation in RSPt. Michael Sekania analyzed the scaling behavior of the Compton profile in elemental metals, using a code based on the Korringa Kohn Rostoker (KKR) method. His investigation also led to the discussion of several technical points in the KKR development, in particular concerning the DMFT part. After the coffee break, Arya Subramonian discussed her recent works on the extension of the two-particle self-consistent method for the solution of the Hubbard model. In the last presentation of the morning, Saleem Ayaz Khan focused on more applied results of the DFT+DMFT method, that is the investigation of the magnetocrystalline anisotropy in FePt. An interesting comparison was made between results obtained with the supercell approach and those obtained in the coherent potential approximation (CPA). After lunch, Silvia Picozzi explained her ideas on how to induce a spin-dependent electronic structure without long-range magnetic order, using ferroelectrics as a testing ground. Biplab Sanyal focused, instead, on complex oxides. He analysed how the transport properties of interfaces are well explained within DFT, without requiring the usage of more sophisticated methods. After the coffee break, all participants attended the developers discussion on the RSPt code. Various problems were debated, but the most extensive discussion was centered on how to have a more user-friendly input format and how to uniform data files to Aiida, which is a framework for computational science built for efficient data mining implementations in mind.

Only two scientific talks were held on Friday 8th. Weiwei Sun presented an overview of his research on the study of two-dimensional and three-dimensional binary transition metal carbides. The last scientific talk of the meeting was given by Duo Wang, who investigated the magnon-phonon interaction in presence of spin spirals, using γ-Fe as a case study. Another talk was scheduled on this day, but the speaker, Hamid Ullah, did not show up, without communicating it to the organizers. After the coffee break, there was a final round of developers discussion, in order to formalize the ideas of the previous day into a realistic distribution of tasks for the next years. After the concluding remarks, all participants left the venue to go back home.

The tutorials were held on every afternoon and were attended by several students as well as senior scientists. The material prepared for the tutorials is freely available, through a github page:

The workshop website contains all the material pertinent to the workshop, including program, abstracts booklet, additional photos and all scientific presentations that participants decided to share.