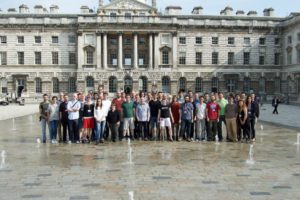 For 13 years now ETSF has encouraged young researchers to take part in the ETSF Young Researchers’ Meeting (YRM). This event which is organised by young researchers for young researchers made its way to London for the first time, as always the high standard of talks encouraged much debate and discussion among the attendees while enjoying all that London has to offer (for a brief moment we had some sun too!!!).

The conference started with an industry session where speakers from outside of academia provided insight to possible alternative research routes, this was followed by an engaging QnA session with the sessions speakers. The rest of the event was dedicated to talks by PhD and Post-Docs covering five thematic topics:

Keynote talks at the beginning of each session gave the participants an overview of the field, an introduction to the theoretical framework and state-of-the-art methods and highlighted open questions. For the organisers this was an experience like no other, detail knowledge of running a scientific event is not something most students gain during their PhD. For the young researchers who attended this event this was an opportunity to showcase their research, improve their presentation skills and learn about cutting-edge research in fields related or unrelated to their own work. And all this, in a friendly environment that fosters stimulating discussions and strengthens the links among young members of a growing community.

This year the program included 37 scientific talks and a non-scientific talk on gender issues within the physics community. Along side the talks around 30 posters were presented which were on display throughout the event providing us with many interesting topics of discussion during the coffee breaks.

Unfortunately this year the traditional game of football had to be cancelled due to a surprised thunderstorm in London.

The friendly and relaxed atmosphere along with the high standard of scientific talks of this event (and last but not least the all-including low-fees policy) makes it a must on the annual conference list of young researchers working in the field and this year one of the attendees made it to his 8th consecutive YRM!!

As is tradition the responsibility of the organisation of the next event is passed to another research group and city at the end of each ETSF-YRM and so we are happy to announce that the 14th edition of the European Theoretical Spectroscopy Facility Young Researchers’ Meeting will be held at Tarragona on the east coast of Spain which promises more sunshine than London.

Getting everything needed to welcome more than 60 young researchers from across the world to London was a long and bumpy road which started back in august 2015, but we managed to pull it off.

The full details of the event can be found on https://yrm2016.github.io/

With huge thanks to all the organisers, supporting organisers, the funding sources (Kings’ College London, Overleaf and especially Psi-k ), the attendees, and of course ETSF,