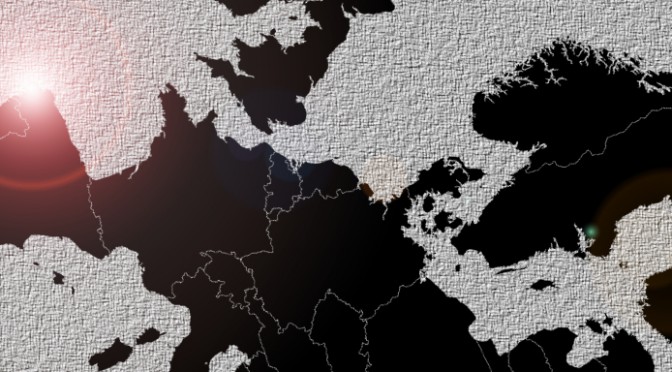 MISSION: Psi-k is a Europe-based, worldwide network of researchers working on the advancement of first-principles computational materials science. Its mission is to develop fundamental theory, algorithms, and computer codes in order to understand, predict, and design materials properties and functions. Theoretical condensed matter physics, quantum chemistry, thermodynamics, and statistical mechanics form its scientific core. Applications encompass inorganic, organic and bio-materials, and cover a whole range of diverse scientific, engineering, and industrial endeavours. Key activities of Psi-k are the organization of conferences, workshops, tutorials and training schools as well as the dissemination of scientific thinking in society.

Psi-k is a bottom-up researchers’ network, established in 1994, to build strength and cooperation in the field of computational electronic structure. Psi-k activities are coordinated by a Board of Trustees, a Scientific Advisory Committee, and 16 Working Groups. These activities encompass the organization or co-sponsoring of ~30 workshops, conferences, schools or tutorials every year, an annual research conference jointly with CECAM, and a major conference covering the entire field every 5 years.

In addition, Psi-k produces a regular newsletter with extensive scientific highlights, and allows researchers to advertise job openings, events, and other topics of mutual interest through its 5000+ members mailing list.

This new website — introduced in  2015 to replace a venerable old site that provided sterling service over many years — offers a much more flexible modern design and functionality and it is to be hoped that it will provide even more stimulus for collaboration and cooperation amongst its members. Instructions regarding how to use it are here.

We hope that you have had a good start to 2022 and are looking forward to more in-person scientific interactions this year.

In particular we have published our programme of workshops on our web site: https://psi-k.net/workshops/

The highlight is of course our whole-community Psi-k Conference in August. We are very encouraged by the positive feedback from the community meeting in November and our Scientific Advisory Committee and are continuing with prudent plans to hold this Conference in person in Lausanne: 22-25 August. We will of course monitor the COVID-19 situation internationally, but at the moment the outlook appears promising in spite of the omicron variant. In particular, meeting in person will be important for the PhD students and early-career researchers in our community.

Please do keep a look out for further announcements about registration – information can be found on the conference web site: https://www.psik2022.net/ 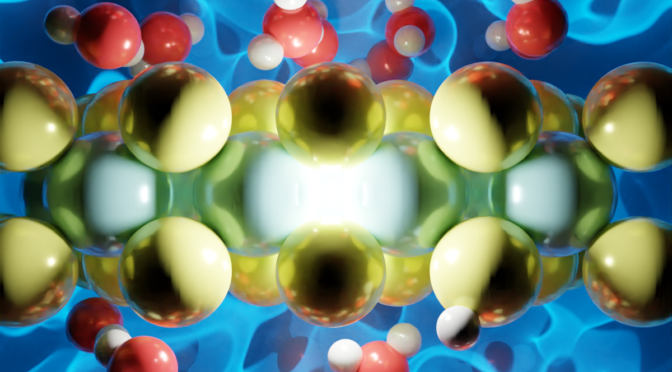 From the 11th to the 13th of October 2021 the first school on multiscale models in Quantum Espresso was held in Texas, at the Lone Star Lodge and Marina, near Pilot Point. The school welcomed 22 in person participants, with 7 instructors from 3 US institutions. More than half of the in-person participants belong to groups that are under-represented in computational physics. While the initial plan for the school was to be in person-only, due to the pandemic situation in Texas and the rules that hindered international travelers to enter the US, the school was converted into a hybrid event. More than 450 participants registered to join the school remotely, with more than 100 participants joining specific Zoom lectures. Details on the country of origin and seniority of the registered participants are summarized in the figure below.

All the lectures were recorded and posted on the school website, accessible at any time for registered and non-registered participants. The school was sponsored by Psi-k and the National Science Foundation (CSSI and CHE programs) under awards #1931479 and #1945139. END_OF_DOCUMENT_TOKEN_TO_BE_REPLACED

The virtual Psi-k GreenALM Hands-on Tutorial 2021 took place from Oct. 11-14, 2021 in virtual form (https://greenalmtutorial.mcl.at/). It was organized by the Materials Center Leoben Forschung GmbH (www.mcl.at) together with the team from the Vienna Scientific Cluster and Co-organizers from KTH Stockholm and Montanuniversität Leoben and was additionally funded by Psi-k and EuroCC Austria. END_OF_DOCUMENT_TOKEN_TO_BE_REPLACED 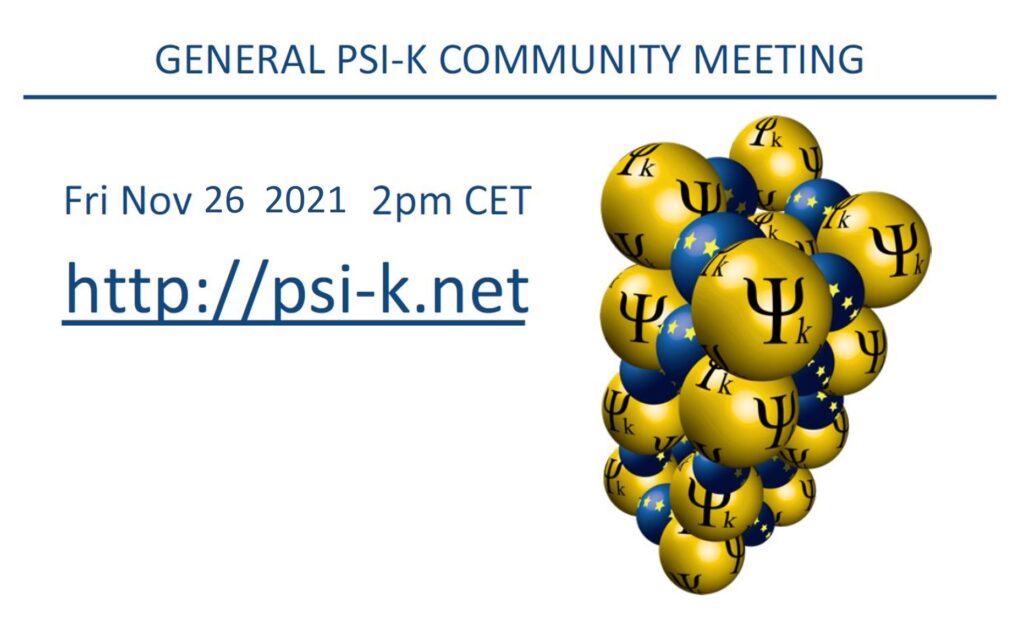 Did you miss the community meeting last week?

You can view a recording of the meeting here.

Hear all about the work of Psi-k plus an update on the Psi-k Conference that will take place in Lausanne next August.

With advances in algorithms and growing computing power, quantum Monte Carlo (QMC) methods have become a powerful tool for the description of a variety of quantum fluids and a viable alternative for high-accuracy calculations of the electronic structure of many atoms, molecules and solids. They are, however, at a less mature stage than today’s ready-for-use quantum-chemistry or density-functional packages: while the production of results on a variety of quantum many-body systems has been going on for at least three decades, a significant effort is still devoted to research and development of methods and algorithms, including real-time dynamics, super-accurate optimization strategies for trial wavefunctions and molecular structures, inputs for the density functional theory of van der Waals forces, and eventually neural networks which at least for small molecular systems seem to improve the accuracy of variational quantum Monte Carlo to the point where it outperforms other ab-initio quantum chemistry methods.

END_OF_DOCUMENT_TOKEN_TO_BE_REPLACED

Last year the pandemic prompted us to organise the first Psi-k community meeting online, which aimed to reach a wide audience and discuss our activities and modes of engagement – from submitting proposals, to becoming involved in the community, to supporting its activities – all to help our field thrive.

The positive feedback and experience last year has encouraged us to organise another meeting as an open webinar on Zoom on Friday 26 November 2021 at 2pm CET – this is Central European Time (you can translate it here: https://time.is/CET); hopefully convenient for many, and with apologies to those for whom it is not.

The webinar link, that you are also welcome to share, is: https://ukri.zoom.us/j/95496792916?pwd=c2tZNFQrZnpvYTVYQUFHUHZuN0pYdz09.

The Psi-k Trustees will be present, and a short presentation will provide an update on developments over the last year and preview of future plans, notably the Psi-k Conference, which we expect to be held in person in Lausanne, 22-25 August 2022. This will be followed by Q&A and discussion that I hope will be as lively and constructive as last year.

I very much look forward to sharing our news and discussing our plans with you.

Psi-k is a registered UK charity governed by a board of trustees. Three trustees will be stepping down at the end of November: Angel Rubio, Mike Payne and Matthias Scheffler. Between them they have served as trustees for over 34 years and we are very grateful for their hard work in support of our community.

The board is seeking to appoint two new trustees, who will serve for five years in the first instance and bring the total number to 12. In view of the legal and other responsibilities involved in being a trustee, it is expected that these will be well-established members of our community with a track record of involvement in Psi-k e.g. having organised workshops or schools. Moreover, the board also wishes to ensure that it represents the diversity of our community, including gender, geography and the research areas of Psi-k as reflected in the working groups. The remaining trustees are listed below.

The board will be seeking suggestions for new trustees from its Scientific Advisory Committee (SAC) when it meets on Friday 26 November. All members and working groups of Psi-k are invited to consider potential trustees and to make suggestions to members of the SAC or trustees. The membership of the SAC is listed on our web site: https://psi-k.net/scientific-advisory-committee/

Anyone wishing to know more about what is involved in being a trustee is invited to contact me as the current chair of trustees.

The DPG Spring Meeting of the Condensed Matter Division is the largest European physics conference (the second largest physics conference worldwide), covering all aspects of condensed matter and chemical physics, and materials science. For many years, Psi-k has supported a Symposium on Frontiers of Electronic-Structure Theory with a special focus topic that changes from year to year. When in person, there has also been an informal Psi-k Get-Together evening event.

In 2022 the symposium will be “Frontiers of Electronic-Structure Theory: Focus on Artificial Intelligence applied to Real Materials”, organised by Georg Kresse, Mariana Rossi and Michele Ceriotti.

We are now seeking suggestions from the community for the focus session at the 2023 DPG Spring Meeting that will be held in Dresden from 20th to 24th March. These will be discussed by the Psi-k Scientific Advisory Committee [https://psi-k.net/scientific-advisory-committee/] at its meeting on 26th November this year.

Suggestions should include a proposed title, a brief outline of the scope of the topic and its timeliness and potential organisers and invited speakers. Please send these to [email protected] by 19th November 2021. A list of recent topics covered follows.

2021: Electron-Phonon Interactions (postponed from 2020)
2019: The Interface Challenge
2018: Correlated Electron Materials
2017: New Concepts and Developments in Density Functional Theory and Beyond
2016: Topology and Transport
2015: Many-body Effects on the Nano-Scale
2014: Non-equilibrium Phenomena at the Nano-scale
2013: Discovery of Novel Functional Materials
2012: Strong Correlations from First Principles 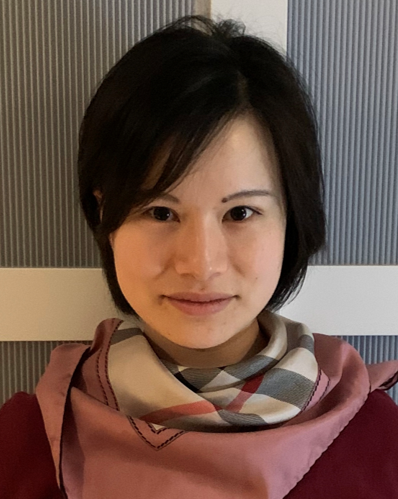 Congratulations to Bingqing Cheng, winner of the 5th Volker Heine Young Investigator Award. Her outstanding talk made her pioneering work  in the field of machine learning interatomic potentials and applications to phase diagrams accessible to a broad audience, and it reflected the breadth and impact of her contributions.

It is a pleasure to invite you to the

The ceremony will feature presentations by the five selected finalists, with the following schedule: